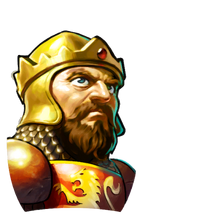 Richard I was a warrior king of England, fighting near constantly from the age of 16, primarily in battles of the Third Crusade.

Richard the Lionheart's Inspire special ability temporarily increases the damage and speed of nearby infantry units.

* First level free for a Hero of your own Civilization.

Retrieved from "https://age-of-empires-castle-siege.fandom.com/wiki/Richard_the_Lionheart?oldid=7322"
Community content is available under CC-BY-SA unless otherwise noted.